NOAA Says Stay Away from the Seals

BARNSTABLE – The gray seal pup season is typically January through March; the harbor seal pupping season usually begins in May in the Northeast region. The National Oceanic and Atmospheric Administration officials are reminding beachgoers to keep their distance from the animals. 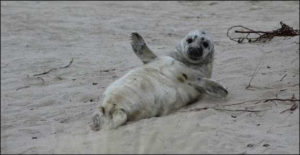 to stay at least 150 feet away from the seals to prevent injuries to themselves or the animals. Please be sure to keep pets away from seals for everyone’s safety.

Pups can also be abandoned by their mothers or forced into the water too early due to human interaction, along with consuming foods that make them ill.

Anyone who believes a seal might be in trouble should contact the Greater Atlantic Region Marine Animal Hotline at 866-755-6622 to allow trained responders to assist the animal.

No selfies with seals please!

The popularity of selfies and capturing any moment through photographs or video is posing a new threat to wildlife and humans, including seals. Getting too close to seals can scare the animals and change their behaviors. Quietly watching from a distance can be even more rewarding than getting the perfect shot. Use your zoom or a telephoto lens instead of a selfie stick, or put your camera down and take a moment to really appreciate how cool sharing the shore with seals can be.

Pups don’t swim very well– which is the reason they are hanging back on the beach while mom hunts. It is normal for a mother seal to leave her young pup alone on the beach for up to 24 hours while she feeds. You may not see the mother, but if she sees you near her pup, she may not think it’s safe to come back. It might only take a few seconds for you to snap the photo, but the mother may abandon her pup if she feels threatened. For the seal pup, the consequences can be devastating. Also, attempting to put or chase a seal pup into the water can cost the pup its life.

Even if the mother is present, if a curious seal pup approaches on its own, the right move is to back away so the mother doesn’t perceive your interaction as a threat and abandon the area, leaving her pup behind.

Are you too close?

Is the seal waving its flippers? Does it look sleepy and is repeatedly yawning? Do you hear it barking or making any other noises? If so, then, YES, you are too close! Despite their appearance, these aren’t friendly behaviors. They are the seal’s way of telling you to back off because it is uncomfortable and getting nervous. Is the seal moving away from you? Another sure sign that you are encroaching on its personal space.

Also, please keep in mind that there is currently a phocine distemper outbreak in the northeast, and we are monitoring the seal population as part of an ongoing Unusual Mortality Event investigation. Please be sure to keep pets away from seals for everyone’s safety.