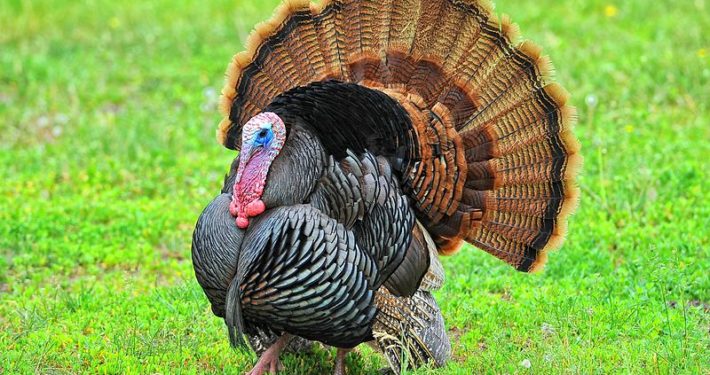 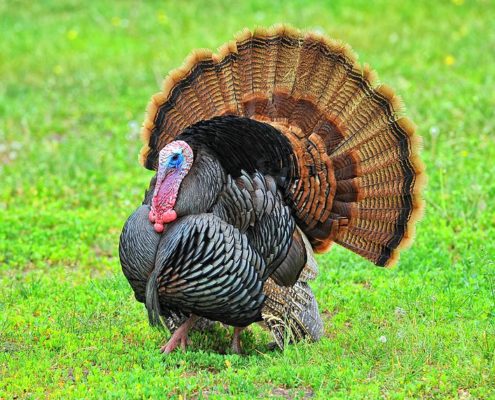 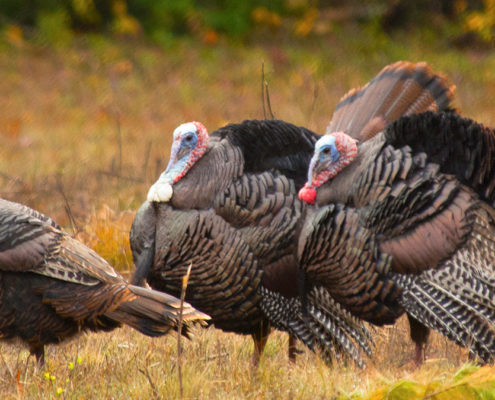 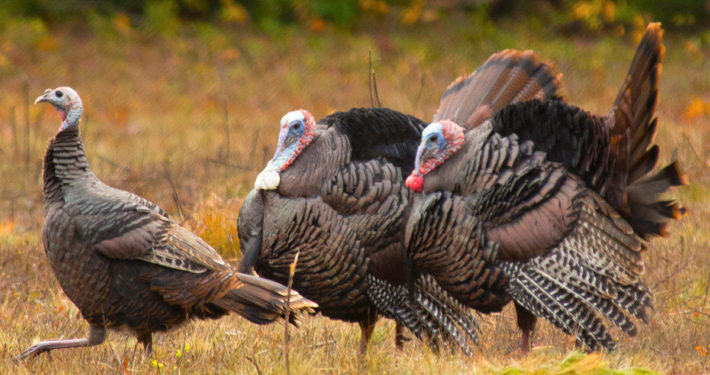 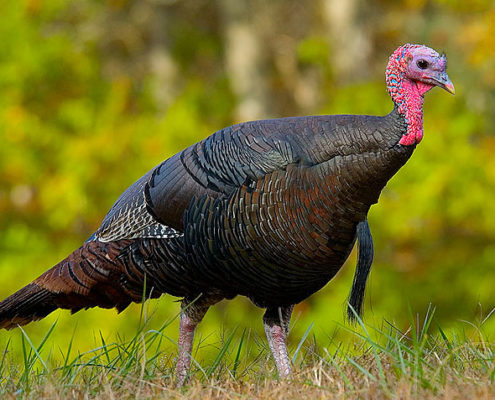 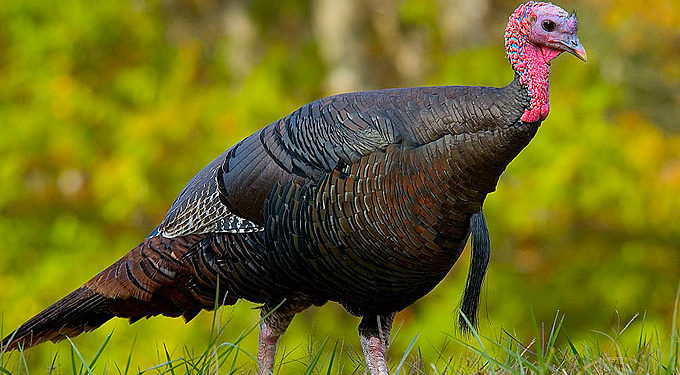 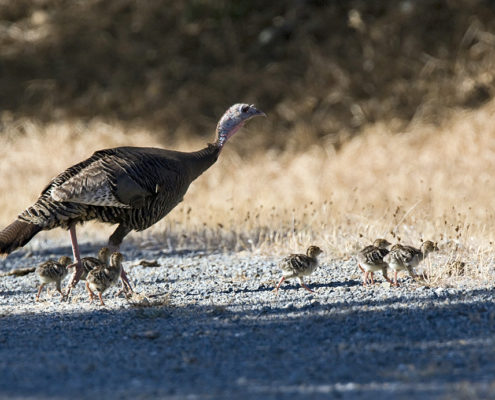 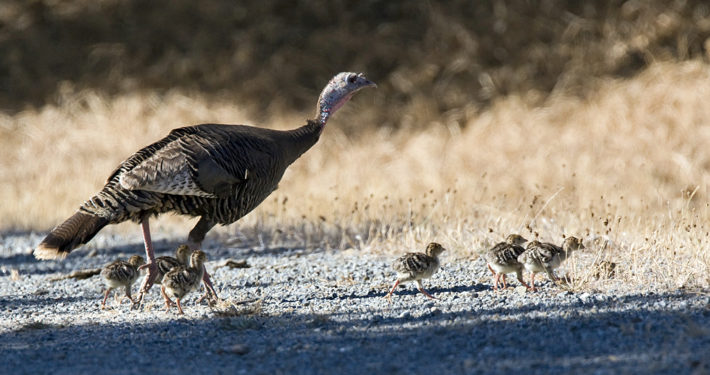 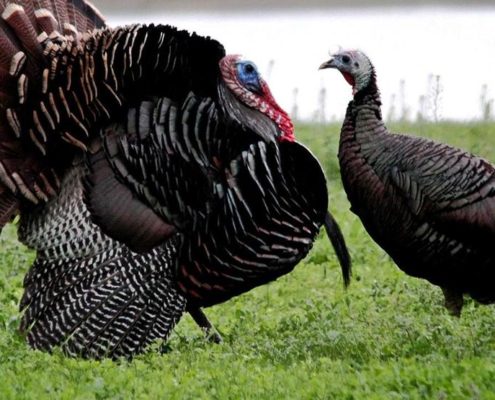 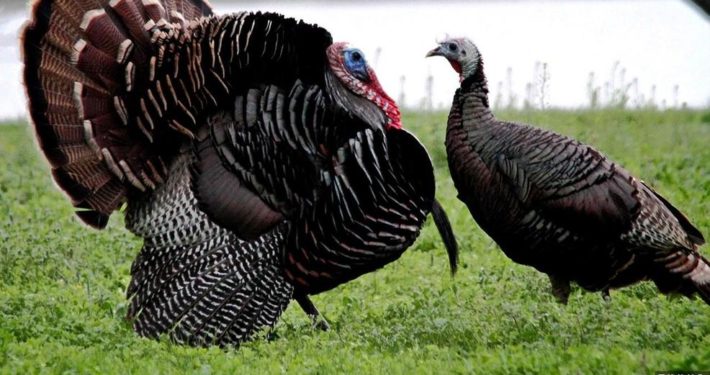 A true American success story is that of the wild turkey.  Abundant when our forebears arrived, the destruction of their habitat along with overzealous hunting depleted their numbers. The idea of reintroducing with captured turkeys into previously populated areas began at the end of the 20th century, and turkeys are once again thriving.

These large, non-migratory birds are black to blackish-bronze with white wing bars, blackish-brown tail feathers and a blueish-gray to red head. Male wild turkeys or “Toms” weigh about 16–25 pounds. They sport a hairlike “beard” which protrudes from the breast bone; also present in some females. When a tom is strutting, its head turns bright red, pale white, or vibrant shades of blue. Females, called hens, are smaller, about 9–12 pounds, typically dull brown with a blueish-gray head. They reach 4’ in height. (Source: Mass.gov.)

Wild turkeys are habitat generalists and thrive in a variety of environments in Massachusetts: agricultural lands, forests, and suburban and urban habitats. Areas with varied habitat types are probably the most productive for turkeys because they provide an optimal mix of food and cover to accommodate the seasonal changes experienced in Massachusetts. Turkeys in suburban and urban areas rely heavily on bird seed located in and around bird feeders and can become quite habituated to specific locations.

Active during the day they roost in large trees at night to avoid predators. In residential areas turkeys can be found roosting on roofs, railings and sometimes on vehicles.

Nesting:  Usually a shallow, leaf-lined depression—1” deep, 8-11” wide and 9-13” long—on the ground at the base of trees, under brush piles or thick shrubbery, occasionally in open hayfields where 12-15 eggs will be laid; no other nesting material is brought in, only what is available at the site.

Wild turkeys generally walk around, though they can also run and fly—females tend to fly when threatened, males tend to run.

Feeding: Turkeys forage in flocks scratching in the leaves on the ground eating plant matter, seeds and insects, sometimes climbing into shrubs or low trees for fruits. Fall, winter and spring when the ground is clear they search for acorns, nuts, berries and insects.  When deep snow covers the ground they may eat hemlock buds, evergreen ferns, mosses & burdock. In spring they may dig up bulbs if other food sources are scarce. If food sources are scarce they may supplement their diet with snails, salamanders, ground beetles and other insects. They swallow grit to aid in digestion.

Courting males gobble to attract females and warn competing males. They display for females by strutting with their tails fanned, wings lowered, while making nonvocal hums and chump sounds. Males breed with multiple mates and form all-male flocks outside of the breeding season, leaving the chick-rearing to the females. Each sex has an independent pecking order, with a stable female hierarchy and a constantly changing male hierarchy.

Once the eggs are laid, hatching occurs in a period of 28 days. Turkeys produce one brood a year, usually occurring the first part of June. Poults are active at hatching. They will remain with their mother for at least 4-5 months. Turkeys learn from each other, often by imitation and association with older, more experienced birds. They remember the location of various foods and the layout of their home range.

Wild turkey flocks are organized by “pecking order.” Each bird is dominant over or “pecks on” birds of lesser social status. Turkeys may attempt to include people within this order, whom they view as subordinates. When turkeys become habituated, as in they know where to go to get what they want, they may become aggressive to achieve their end means. This may involve chasing people or pets perceived as deterrents. Once bold behavior is established it is hard to change. (Source: The Cornell Lab of Ornithology)

Parasites cause a wide number of diseases in wild turkeys

As with any wild encounter, wash your hands thoroughly with soap and water.

If you should harvest a wild turkey that appears to be acting strangely or appears to be ill, do not freeze, but keep the bird cold and get it to your state wildlife agency for examination.

The Cornell Lab of Ornithology

9 Fun Facts about the Wild Turkey