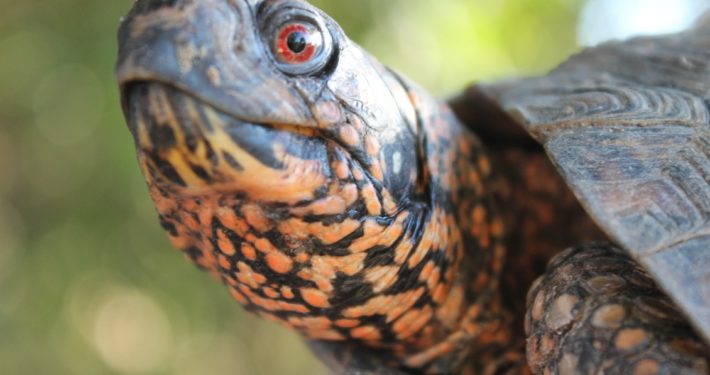 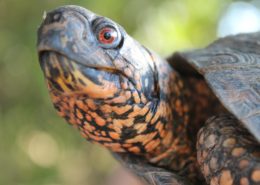 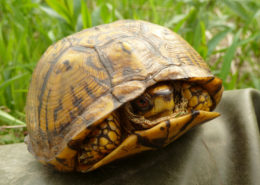 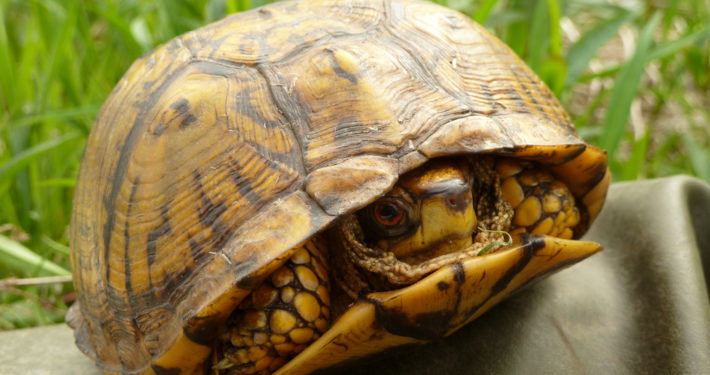 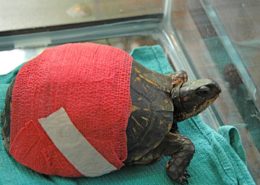 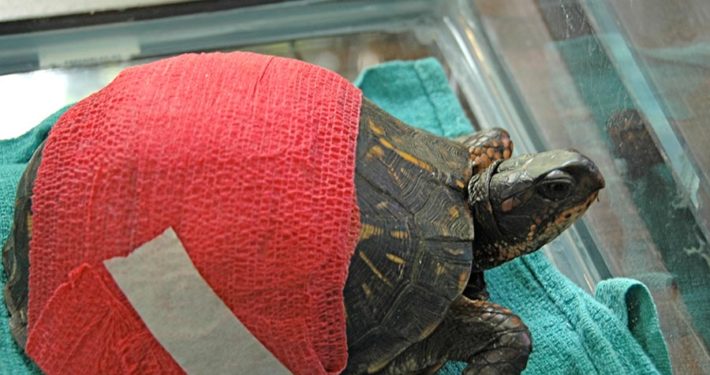 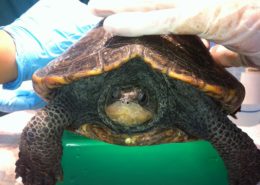 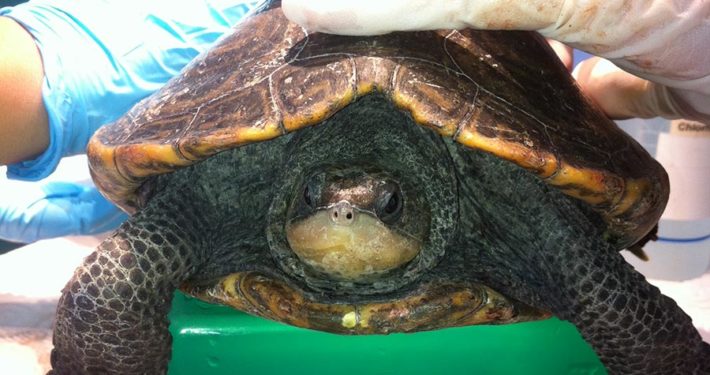 A terrestrial or land turtle, so named because it can withdraw its head and legs completely into its carapace—upper shell—and its plastron—lower shell.

Relatively small, ranging from 4-1/2” to 6-1/2” in length, adults have a high-domed, oval shaped carapace. Sometimes the Blanding’s turtle is confused with the box turtle, but it does not have the ability to completely withdraw into its shell.

Coloration in adults: carapace is brown or black with yellow, orange or reddish with an irregular blotch pattern. The plastron is generally lighter in color with dark blotches, or sometimes completely tan, brown or black.  The head and neck are a light and dark combination, including black, brown, orange or yellow.

Their range is from southeastern Maine to northern Florida, and west to Michigan, Illinois and Tennessee. Within Massachusetts the greatest density is the southeastern regions of the state.

In the northern part of its range, box turtles will hibernate from October/November to mid-March or April, overwintering a few inches below the soil and under leaf cover or woody debris. As the temperature drops they will burrow further into loose soil. They do not hibernate communally but may be in close proximity to one another.

With the advent of warmer weather they will emerge to forage and mate in the forest and fields. During summer months most activity is in the morning and evening, particularly after a rainfall. To avoid the heat of the day they will seek shelter in cool areas such as rotted logs, mammal burrows or mud. They may scoop out a domelike space, called a “form” to sleep in at night, in leaf litter, grasses, mosses or ferns. They may return to these same forms over a period of weeks. In extremely hot weather they may be found entering small, shallow pools and puddles to maintain regulate their body temperature.

Box turtles are omnivorous. They will eat slugs, insects, earthworms, snails and even carrion. They have a fondness for mushrooms, berries, roots, leaves, seeds and fruits.

Box turtles have superior vision. Not just in the daytime, but also at night. And, they can see colors. Their eyes have lids, unlike some other reptiles, such as snakes. They close them when sleeping and when they’re happy. Their eyes are placed to look downward, more toward the ground

Mating takes place between April and October. Females can store sperm and lay fertile eggs up to four years after mating. Females generally nest in June or July and will travel great distances to find an optimum locale. These may be the turtles seen crossing roads! It is not unusual for a female to return to the same area year after year to nest. Eastern box turtles rely on "bumping into each other," literally to continue the species, so population density is very important. The sparser, the less chance there is for an accidental meeting and the less chance of a successful breeding. It is also believed an adult box turtle does not survive long outside of their normal, personal range--so well meaning people moving turtles to a "better" location for the turtles' safety. (Source: Reprinted with permission from Rescuing Wildlife, by Peggy Sue Hentz, Red Creek Wildlife Center, Inc.)

Eastern box turtles are a “species of concern” due to the decimation of their habitat areas, road mortality and other mitigating causes—generally  related to human interference.

Salmonella - can be transmitted easily to humans by humans touching a surface previously touched by the turtle. Turtles can carry the infection asymptomatically, meaning they do not show signs of illness. Box turtles are commonly kept as pets and the prevalence of salmonella is not uncommon.