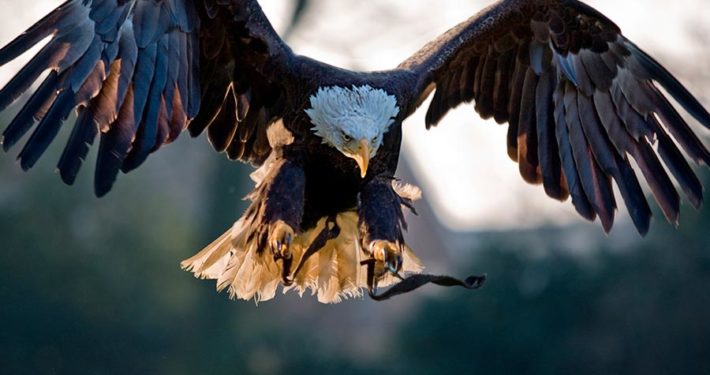 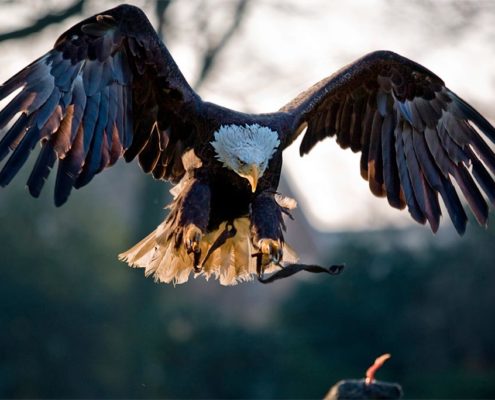 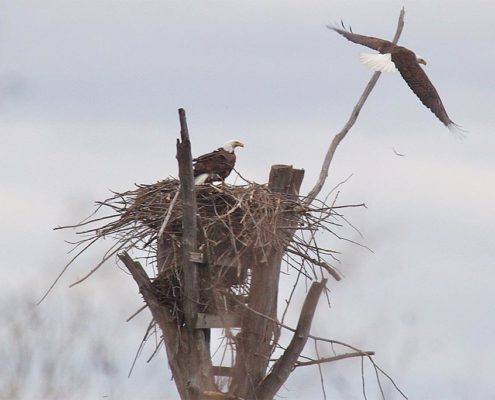 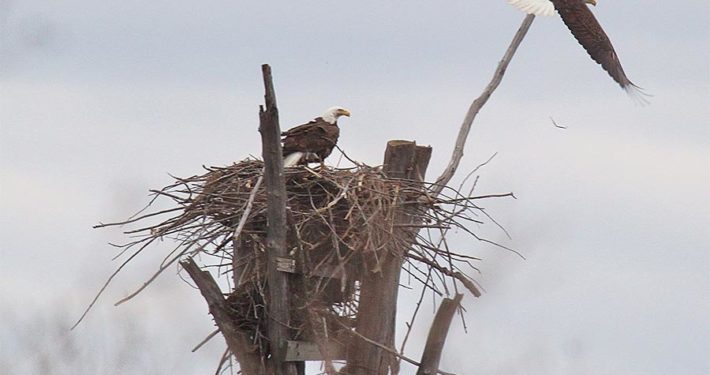 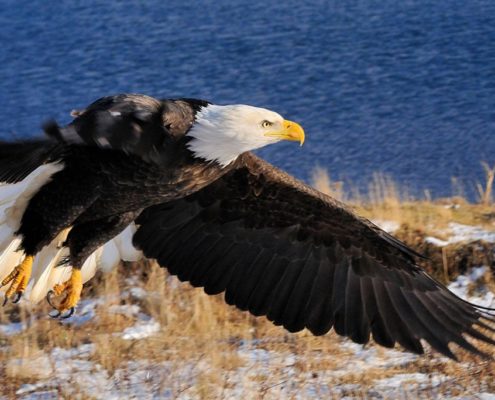 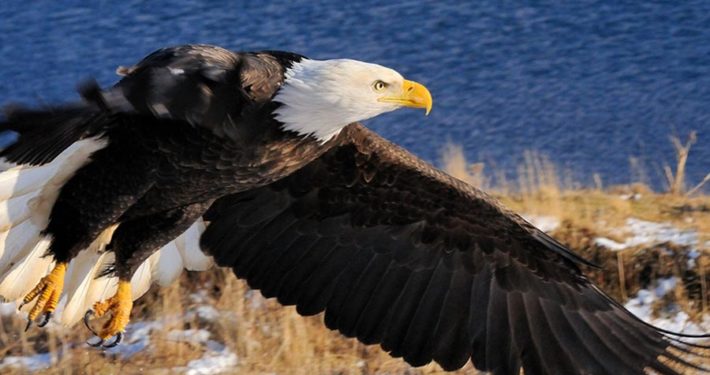 The adult plumage, white head and dark body are attained at 4-5 years when a bald eagle reaches sexual maturity. An eagle's eye is almost as large as a human's, but its sharpness is at least four times that of a person with perfect vision. The hooked beak, a primary trait of a raptor, is used for tearing. Behind the hook, the upper mandible, the edge sharp enough to slice tough skin, over laps the lower, creating a scissors effect. A bald eagle's beak is a strong weapon, but is also delicate enough to groom a mate's feathers or feed a small portion of food to a newly hatched chick. The beak of a female eagle is deeper (distance from top to chin) than the beak of a male. The beak and talons grow continuously, because they are made of keratin, the same substance as our hair and fingernails. The beak of a captive eagle is not warn down naturally, so must be trimmed annually. The talons are important tools for hunting and defense. Eagles kill their prey by penetrating its flesh with their talons. Eagles can open and close their talons at will. If an eagle is dragged into the water by a fish too large for the eagle to lift, it is because the eagle refuses to release it. (American Bald Eagle Information)

Specific to Massachusetts, bald eagles almost become extinct at the turn of the 20th century due to habitat loss and legal hunting of birds of prey, and the use of toxic chemicals in agriculture. In 1989 deliberate “seeding” by scientists began to re-introduce the bird.  Bald Eagles usually inhabit coastal areas, estuaries, and larger inland waters, such as the area around the Quabbin Reservoir. (WBUR News)

This species requires a great amount of shoreline habitat containing stands of forest for nesting and trees projecting above the forest canopy for perching, an adequate supply of moderate-sized to large fish, an unimpeded view, and reasonable freedom from human disturbance. Wintering eagles require suitable roost trees for night roosting. Some such roosts may be 12 miles or more from feeding areas. (Natural Heritage & Endangered Species Program; Mass. Div. of Fisheries & Wildlife) The greatest density of American Bald eagles is in Alaska, with half the world’s population living there. The proximity to salmon, dead or alive, is the major component of their diet and helps them flourish there. (American Bald Eagle Information)

Breeding & Reproduction:  Courtship occurs in late fall to early winter in Massachusetts—and is a spectacular sight consisting of aerial loops, cartwheels, dives, and ending with the prospective mating pair locking their talons together and diving straight downward for hundreds of feet while spinning head over heels. Bald Eagles may live up to 30 years, but mortality is relatively high in the immature age classes. They mate for life, but if one member of a pair dies or is killed, the other will actively court another mate.

After courtship, the mated pair builds a large nest during December–February, constructed with large sticks and lined with sprigs of pine, grasses, and other soft materials, gathered by the male eagle who delivers it to his mate, who is responsible for most of the actual nest construction. Once the nesting site is chosen, the mated pair will usually return every year to the same site and add to the existing structure.

The female Bald Eagle lays one to three (two average) eggs several days apart, usually between early March and early April. The eggs are incubated for roughly 35 days. Eggs do not hatch at the same time, giving an advantage to the first hatched chick to survive since it will be able to overpower the latter hatchling if food is scarce; this behavior increases the probability that at least one chick will survive. Young eaglets grow rapidly and may eat up to two pounds of fish per day. Ten weeks after hatching, they begin to make short flights from the nest, spending much time with the parent birds observing the adults as they catch and find food. By late fall the adults will no longer care for their young, and the fledgling eaglets begin life on their own. The entire breeding cycle, from nest construction to fledging of young, lasts 6–8 months. Most Bald Eagles appear to nest within 200 miles of where they hatched.

Diet: When available, fish (both marine and freshwater) is the preferred food. Fish may be captured by swooping from a perch or by coursing low over the water and dropping straight down when a fish is spotted. An eagle may plunge into the water to capture fish and may also steal fish from an osprey by harassing it until it drops its catch. Prey too large to carry may be dragged to shore. Birds, especially waterfowl, are sometimes taken by bursting into a large flock and pursuing a straggler until it tires and can be captured. Bald Eagles also take crippled waterfowl and seabirds, small mammals and carrion, particularly dead fish. In winter, eagles of all ages may gather in large numbers at areas with open water where fish or waterfowl are abundant. This "social grouping" is believed to facilitate locating and acquiring food and may possibly aid in establishing or maintaining pair bonds. (Natural Heritage & Endangered Species Program; Mass. Div. of Fisheries & Wildlife)

If a call is received regarding a large raptor, i.e., they should be instructed to call Wild Care (508) 240-2255 on whether or not they should even approach it. Talons and beaks can inflict serious damage and an experienced handler should be notified.