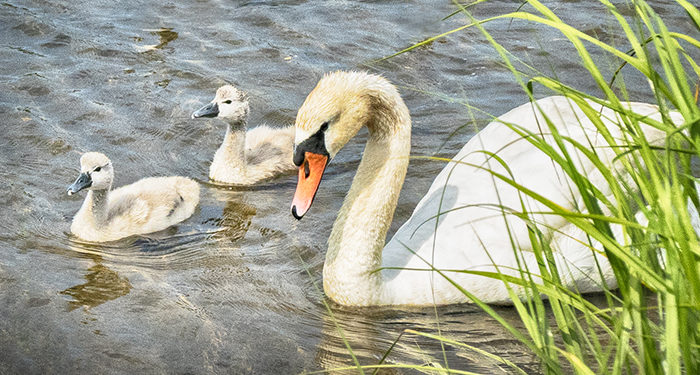 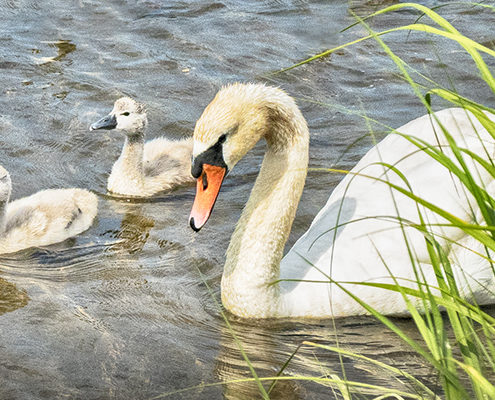 A large, brilliant white bird, the mute swan has become a mythological character in fairy tales and Russian ballets. While floating, the mute swan maintains a posture of a curved S-shaped neck. downward pointing bill, and wings held in a slightly raised position above its back, and is readily identifiable in city parks, bays and lakes from the the Northeast & Mid-Atlantic, to the Great Lakes and on to the Pacific Northwest.

Young swans (cygnets) come in two color morphs--the gray, or Royal which start with gray down and grow and grow in gray-brown and white feathers, giving them a mottled look. White (or "Polish") chicks have all white down and juvenile feathers. Adults of the white morph may have pink or gray legs and feet instead of black, but otherwise the adults look alike with the male being slightly larger. (Source: The Cornell Lab of Ornithology)

Mute swans are long-lived (20 to 30 years) and can breed every year after 3 years of age. However, the reproductive rate drops considerably after age 20. Based on banding records, the oldest mute swan known was a male and when found was at least 26 years, 9 months; found in Rhode Island, where it had been banded. All of the mute swans in North America descended from swans imported from Europe from the mid 1800s through early 1900s--escapees are the forerunners of the established breeding populations. A males is called a "cob," a female a "pen." (Source: ct.gov - Dept. of Energy & Environmental Protection)

While brought to this country to adorn estates and public parks, where they can still be found--they can also be found in shallow wetlands, lakes, rivers and estuaries where they've become established in the wild. Mute Swans can adapt to degraded habitat and actually benefit from the spread of the invasive common reed Phragmites australis, which flourishes in disturbed sites. As the reeds spread into lakes and ponds, the swans can build nests farther offshore in the reed beds, where they’re safer from egg predators. They are essentially non-migratory, with breeding pairs remaining in inland waters into winter if open water remains and a food source is adequate. When a freeze-up occurs, most swans are forced into coastal areas or major flowing rivers where open water is available. (Source: ct.gov - Dept. of Energy & Environmental Protection)

Mute Swans spend most of their time floating on the water. They feed by grazing on underwater vegetation in shallow water, tipping up their bodies if necessary. These aggressive birds often hold their wings half-raised in a display as they swim toward an intruder.

Breeding & Reproduction: Most mute swans breed at 3 years of age and remain with the same mate for life. Courtship displays begin in late February and each pair vigorously defends a territory (four to 10 acres in size) from other swans. The black knob at the base of the male Mute Swan's bill swells during the breeding season and becomes noticeably larger than the female's. The nest, constructed in late March or early April, is typically a large (approx. 4 feet across) somewhat circular pile of aquatic plants built on an island or in clumps of cattails or grasses along the edge of the water. An average of 5 to 7 eggs are incubated by the pen for 36 to 38 days. Usually one nesting attempt is made, but swans will readily re-nest if the original clutch is lost to flooding or predation. The cob becomes more aggressive when defending the incubating pen or young cygnets and will chase and even attack other nearby wildlife and people--a wide berth should be given to nesting mute swans who can be extremely aggressive and frequently attack canoeists, kayakers, and pedestrians who wander too close to a nest or chicks. Most cygnets fledge by early fall but will remain with the adults until late fall. Survival after fledging is high and 50% of the young can be expected to survive about 7 years. (Source:ct.gov - Dept. of Energy & Environmental Protection)

Diet: Mostly herbivorous, swans have a voracious appetite for submerged aquatic vegetation; a Maryland study found they ate up to 8 pounds a day of submerged aquatic vegetation. The large quantities of aquatic vegetation that are consumed by mute swans often result in overgrazing and the destruction of habitat, ultimately having negative effects on aquatic habitats and the native species associated with such ecosystems. Occasionally, swans will feed on insects and other invertebrates. (Source:ct.gov - Dept. of Energy & Environmental Protection)

Newcastle disease
West NIle Virus (WNV)
Avian Influenza (AIV)
Salmonella
E. coli
Botulism
Chlamydophila psittac
It is difficult to determine whether or not waterfowl pose significant disease transmission risks to human and/or domestic animal health. By and large, the scientific basis for most of the implied associations between pathogens in waterfowl and disease in humans remains anecdotal or speculative (Source: PMC-PubMed Central)

The Cornell Lab of Ornithology

"Mute swans are not native to the US and therefore are not protected by the federal Migratory Bird Treaty Act of 1916, making it possible for states throughout this bird's North American range to actively manage populations," i.e., kill them.

If a swan has been identified as needing rescue, it is very important for the person(s) rounding-up the bird to be wary of the bird's wings. A bite can leave a painful welt, but a full-force blow from a swan is powerful enough to cause serious injury to a handler. Care must be taken to during a rescue to hold the bird's wings against its body to prevent injury to both the bird and the rescuer.